The iPhone 3G S and the Camera. 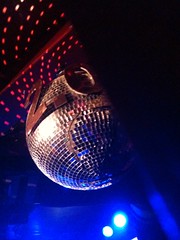 I picked up the new phone on Friday just before lunch at the AT&T store in downtown Seattle. There was no line when I arrived, but one formed shortly after. With there being no line and AT&T stating the only phone left in stock was exactly the one I wanted, I figured it'd be best I purchase it.

Either way, the big reason I was stoked on getting a 3G S was for the new touch to focus camera features. With that said, the camera definitely lives up to what I was hoping for. Still no zoom, but other than that it's amazing! The touch to focus works great. The macro focus is amazing. The clarity and color are better and I believe it's an extra mega pixel.

Most of all I'm surprised by the speed of the new phone. The 3G S is much faster than the 3G. Kudos Apple.

I love this picture (taken with 3G S).

oh yeah, the video rocks too.